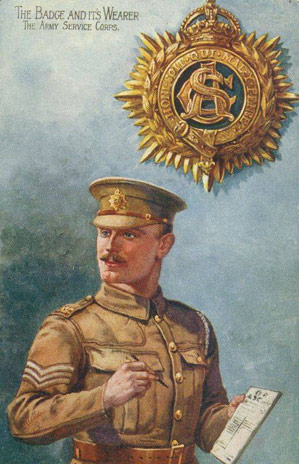 On 1st September 1914 William John Benham presented himself to the recruitment office in Andover and signed up to the Army Service Corps.

While working for Gilbert Culley, William John Benham had been living as one of the family 1. As they explained to the reporter from the Andover Advertiser, it was a blow to the Culleys to lose him so soon to the war effort:

War correspondents now-a-days have obscurity of diction enforced upon them with the avowed object of keeping the enemy in a fog, but this arbitrary restriction only succeeds in mystifying the British public. Some things, however, the enemy are bound to know and feel before very long, for some of our young men have the knack of making their presence felt in the fighting line in a remarkably short time. It may therefore not be regarded as disloyal to state that Messrs.Culley Brothers have lost several of their men—all total abstainers and lads that can be depended on in any emergency. Messrs.Culley Brothers recognise the voluntary system of the country; and have not therefore placed any pressure on their men to go; but when their men expressed the decision to go Messrs.Culley paid them their Michaelmas money in advance, and assured them that their places would be kept open for them. The names are Frank Cummins, William Benham, and Wedge, the two former having been three and seven years respectively in Messrs.Culley’s service. Mr.Ewart Culley is with the Territorials. Notwithstanding the loss of their men, Messrs.Culley were able to finish their harvest on Tuesday. The determination to keep the men’s places open for them entails a good deal of hard work and self-sacrifice upon Mrs.Culley, her son Mr.Gilbert Culley, and all at home. Mrs.Culley lost her husband six years ago, and is particularly hard hit by the outbreak of war.

Frank Cummins and the Wedges will be the subject of separate posts.