The St Mary Bourne cricket team for 1906 look remarkably glum for a group of people who had just won the village league challenge cup. Perhaps the photographer was one of those annoying professionals who spend so long  perfecting their work that they have long since left their sitters behind in a slough of despond.

Dr Royds, as the president of the cricket team, sits in the centre of the group, looking as thoughtful as any. Perhaps he was thinking of his daughter Dorothy, who had died just the year before at the age of nineteen. Perhaps he was thinking of his son William, who had apparently taken to heart the injunction ‘Go West, Young Man’, and seemed destined for a life in the Americas.

Or perhaps he experienced one of those sudden presentiments – within ten years most of the young men surrounding him would be at the Front, fighting for their country and their young lives.

One of those who would go to war was his own son, George Freeman Royds, who  in due course would have a distinguished war in Mesopotamia, but as a professional soldier had been in at the start. 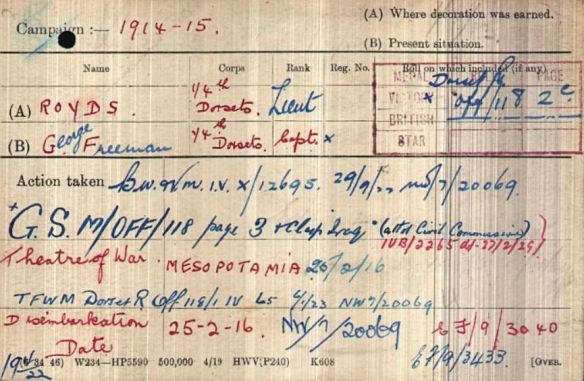 He considered himself lucky, in a way, to have the compensations of his profession to keep him from dwelling too long on the sadnesses of his life – there were too many things to be done and people to be attended to.

Extract from ‘A Village Story’ by Kathleen Royds Innes 1955

Post script: WRONG HOUSE! This is where Dr Royds’ daughter lived on marriage to George Innes, not the Doctors’ house – see post of 7 December 2014 https://stmarybournegoestowar.net/2014/12/07/led-up-the-garden-path-by-laurus-nobilis/