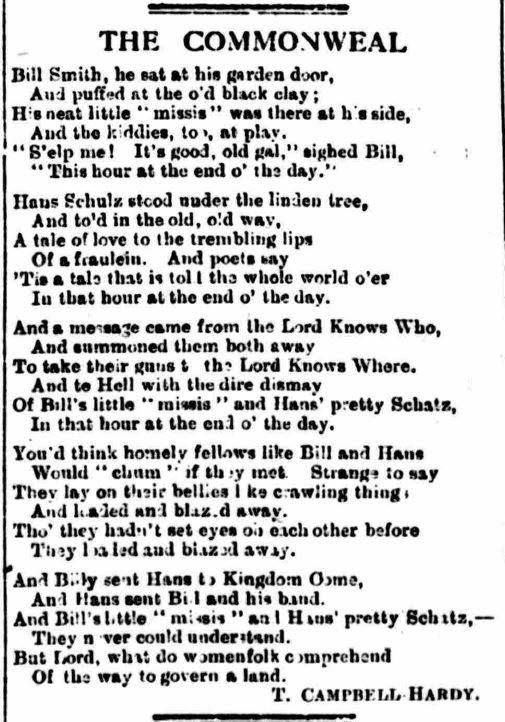 Bill Smith, he sat at his garden door, and puffed at the old black clay [pipe]; his neat little missus was there at his side, and the kiddies, too, at play. ‘So help me! It’s good, old gal’, sighed Bill, ‘this hour at the end of the day.’

Hans Schulz stood under the linden tree, and told in the old, old way a tale of love to the trembling lips of a fraulein. And poets say ’tis a tale that is told the whole world o’er in that hour at the end of the day.

And a message came from the Lord Knows Who, and summoned them both away to take their guns the Lord Knows Where, and to hell with the dire dismay of Bill’s little missus and Hans’ pretty Schatz, in that hour at the end of the day.

And Billy sent Hans to Kingdom Come, and Hans sent Bill and his band. And Bill’s little missus and Hans’ pretty schatz, they never could understand. But Lord, what do womenfolk comprehend of the way to govern a land.

Note: Yes, this is doggerel, but I find it none the less effective for that, and I hope you do too.